Most Important Principle: Have a Plan!
One cannot expect to just run and call the police at 9-1-1 and everything will be taken care of; police times are not what they need to be. However, defense is more than recognizing your willingness to defend yourself. Plan out what your family should do in case of an intruder and make sure every individual is thoroughly aware of what they should do (also, if there is an intruder alarm, making sure everyone knows the difference between a fire and intruder alarm). One must use their home advantage to the fullest, as intruders will be both more awake and more aware than you. For defending your family, know the places to hide (blind spots) within your house. In addition, you must plan where you draw the line as to when you defend, ie know that you will aggressively defend if an intruder comes up the stairs.

Tips:
Bullet in the chamber? With the burst of adrenaline and loss of fine motor skills, it might be a good idea to have it chambered instead of having to rack the round. Also, aiming for the biggest target (the body), is usually the best strategy in a high stress situation (this is also the policy that Police run by).
Make sure all family members who have access to the weapon: Know if there’s a bullet in the chamber, are well-practiced with the gun (shooting, handling recoil, checking if loaded)
Taking the stairwell is a big commitment and probably not a good idea. Holing up in the bedroom leaves you no where to go.
Add “Beware of dog” or Alarm System signs/stickers in the yard/windows (or actually have an alarm if you can afford). Deterrence (ie making your home less attractive to intrusion) is better than perfect defense.

Best Gun for Home Defense
While the public generally believes a shotgun is best for home defense and some experts believe pistols are preferred, it is most important that the operator, while using the weapon, has the ability to be quick, proficient and effective in delivering shots to a target. If the operator does not know how to effectively use the gun, then they should not use the weapon in a life or death situation. Also, when in correct usage, a pistol or shotgun both take up the same amount of space (you outstretch your arms holding a pistol in proper form vs a shotgun against your shoulder).

– This is the most powerful home defense weapon. Difference being that Mossberg 590 feels clunky, it rattles, not as refined as an 870, lower build quality, doesn’t look as finished. But just as useful. Difference between the Mossberg 500 and 590 is that 590 has a threaded nut like the Remington 870, easier to clean and can mod with magazine tube extensions. Only difference from 590 to 590A1 is an aluminum safety and trigger guard and heavier barrel.
Remington Youth Model 20 Gauge – Better for a woman. Still twice as powerful as a 44 and has a shorter stock and easier for you to fight with them. Anyone who can shoot a 12 gauge can shoot a 20 gauge better.

Myths: It is not always true that cocking it or waving it at him will scare off people. And people say “you can’t miss with a shotgun” as compared to a pistol, but this is not true. Also not true that a shotgun with one shot will take a person down. Cutting the barrel or buying special ammunition for a tighter pattern is unnecessary; use slugs if you don’t want to spread pellets but shotguns were made to buckshot (don’t use tactical or low recoil ammo – it’s low power/penetration, use full power if you can – 2 or 3 qtr inch ammo) and you can have slugs in a side saddle for distance. Also, shortening the barrel to be more tactical/mobile offers a negligible difference; get a 18-20 inch barrel, cylinder bore with a beadsight (and note the beadsight is made for 100 yards so slugs fall, if the target is less than 100 yards you need to aim lower). Note that buckshot spreads 9 33-caliber pellets (not so unlike a 9-bullet MP5 burst) and the pellets spread 1 inch per yard (so a distance of 25 yards means 25 inches or 2-3 feet of spread). Buckshot, birdshot, and a slug (solid round) out of the muzzle are about the same thing, even birdshot will still go through walls in home defense (as also a handgun). Your only choice for not going through walls is the AR-15 (ball .223 ammo like XM193) as the high velocity projectile’s fragmentation will break apart more easily, unlike the buckshot or a 9mm. 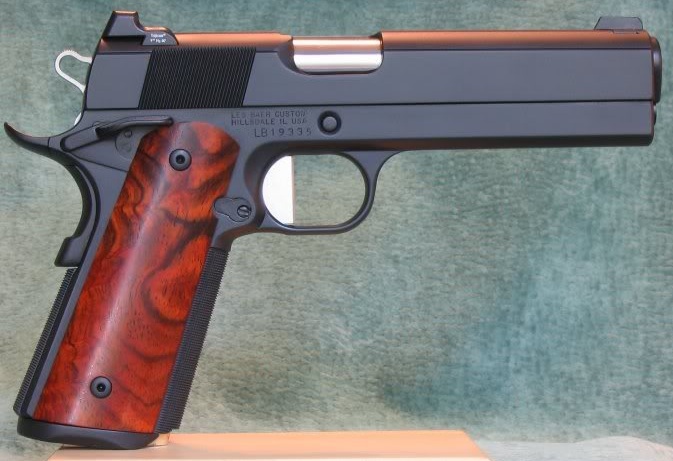 Why this Glock is Best: 9mm is recommended over 40 (.40 S&W) or 45 (.45 ACP); more capacity, cheaper ammo, low recoil. And Glock is known to be one of the most, if not the most, reliable pistols ever. 16 rounds in a Glock is a big difference to a 5 shooter revolver, and can have extra magazines and it’s as simple as “put the magazine in, pull the slide, pull trigger.” The extra bullets are way more useful then the added stopping power of a .45 (such as a 1911 with its 7-9 bullets). Also, high pressure rounds, ie 40 cal (Glocks even) and 357 (.357 SIG), wear out the gun faster (slide moves faster and harder). In addition, statistically 7/8 people shot with a handgun survive, largely due to our effective trauma care and that handguns are ineffective tools; the caliber of handgun does not have much affect in its effectiveness. The Glock 19 (compact sized) is recommended over the Glock 17 (regular sized, same circumference grip but longer length, longer barrel) as its smaller size makes it easy enough to carry concealed or off duty. The higher capacity clips of the Glock 17 also fit the Glock 19.
Best Custom Premium 1911 (just for fun): Les Baer Monolith Heavyweight .45 Les Baer

Not recommended
– Pistol grip only shotguns – hard to shoot, anyone will shoot better with a non-pistol grip
– Revolvers, as they are more difficult to learn/master. Even the most experienced competition shooters take longer to dump the shells, reload with a speed loader, close the cylinder and get back on target. Also, the trigger is heavier, recoil is worse, and has a lower capacity. Yes, revolvers are more “reliable” in that they don’t jam, however, modern pistols don’t jam (bigger ejection ports, stronger guidesprings, etc. than older pistols). Even a $450 poor brand such as a Ruger or Taurus will jam maybe 1 out of 1000 shots.
– .45 1911s (such as the beautiful custom Les Baers Monolith Heavy)
– AR (30 round .223) is a complicated weapon system, should you not know how to work it.

Accessories: Night sights are unnecessary as you won’t have the time to line up the sights, you’re just going to push the pistol out from your body and shoot. A better investment is a light (preferably weapon mounted instead of hand held).

Best Pepperspray for Self-Defense [RECOMMENDED SELF DEFENSE]
Fox Labs Pepperspray Flip Top – Cone Fog (for those who are skittish) [Amazon 2oz] [Amazon 4oz]
Fox Labs Pepperspray Flip Top – Stream (for the calmer in tough situations, takes slightly more precise aiming) [Amazon 2oz] [Amazon 4oz]
Pros of pepper-spray: Can use on multiple attackers effectively. Also, pepper-spray is great for defense against dogs; whereas against a gun, the dog will keep coming at you (it does not react to a bullet like a human would ie a human would psychologically say “I’m hit” and give-up).

Best Knife and Self-Defense Flashlight
Note: I do not recommend a knife to most because, for the inexperienced, it is just as easy to hurt oneself than to hurt someone else. Also, a flashlight might not be as reliable as the pepper spray.
See: “Best Outdoor Gear (Camping, Hiking)”

Best Hand-to-hand Self-defense Advice
The punch: Make a fist (with thumb outside of your fist, airtight by pulling the flesh of your palm with your fingers). Keep your elbows vertical (downward) in both stance and as you punch (bending vertically and not swinging your elbow out to bend horizontally). This punch both has more force by using all triceps (instead of the less-direct shoulders) and has less distance to travel (more direct, therefore quicker), because unlike a haymaker, you’re not pulling back your fist or curving the punch beforehand. Not only this will make it faster than the enemy’s punch but also make it harder for the enemy to react because a direct punch expresses less depth perception to the enemy. With this method the fist is vertical unlike the horizontal fist of boxing. The concurrent snapping/twisting of the hips (without unbalancing oneself) and pushing oneself forward into the punch with the balls of your feet will also make it more powerful, as you will be throwing your bodyweight into it.

Remember: It is better to master one type of punch than to practice 20 different attacks. Practice this punch as often as possible, do push-ups to strengthen your triceps (diamond push-ups work your triceps the most, knuckle push-ups help callus the knuckles and mentally prepare one for punching). Practice sparring with friends, with a punching bag, shadow boxing (punching the air). One can do most of these things while normally watching TV or movies.

Strategy: Aim for the chin (it is the pivot point of the head, people are knocked out by chin hits because of the snapped force of the brain hitting the skull). If you instead hit their cheek, the force will be distributed along the whole face. Throw both fists one after the other (right left right left), while always walking towards the enemy (do not relent as he may back up or dodge and recover). Make sure you are hitting with your first two big knuckles of your fists (a hit with your other knuckles will break your hand).

Extra: Bruce Lee’s stance style is to hold your strongest arm forward (like a fencer) because it is the arm you will punch with most with. You also both snap your hip and push off your back calf to make your punch much stronger. This takes a lot of practice to keep everything in unison and to make sure you are not making a pre-punch movement that foretells your punch to the opponent.
Source: Bruce Lee

Disclaimer: Please check your local laws regarding pepper spray and self-defense. Any advice held within this post or website are for entertainment purposes only.

Best Gopher Hunting Gun / Ammunition: CZ 452 Bolt 4X -14X bushnell (either .17 HMR or .22 WMR)
CZ offers great accuracy, reliability and top quality. 452 model is recommended over 455, as the 452 has longer length barrel and better adjustable iron sights (the 455’s perk of interchangeable barrel is not necessary, albeit the 455 is said to have better finish quality). Bolt actions are recommended, as they are more reliable and easier to clean. The .17 will be more accurate but the .22 will be definitely instant-kill.

Substitutes: Marlin (while the Marlin is the most accurate in its price range, CZ is the better quality)

Best Value [most recommended out of all these]: JM Leather @ JM-Leather
Secondary: Tombstone @ Knights Leather Products

Note: There is no permanent solution. Try to get the product from a retailer with a 30-day money-back policy. History:...