Note: Smoke responsibly. Generally speaking, e-cigarettes are safer than traditional cigarettes, however, there are still find some hazardous material in e-cigarette smoke (yet possibly 10% of the amount as compared to cigarettes). While not vaping is preferable to vaping, e-cigarettes have helped many people quit cigarettes, working while other treatments such as gum, the patch, drugs, hypnotism, and acupuncture failed. Benefits from switching to vaping from cigarettes include: Feeling much better, not smelling like an ashtray all the time, not staining teeth yellow, less cancer and other risks, spending ~$15 per month instead of $9 per day. Source. E-cigarettes are less cytotoxic on lung cells compared to tobacco cigarettes Source 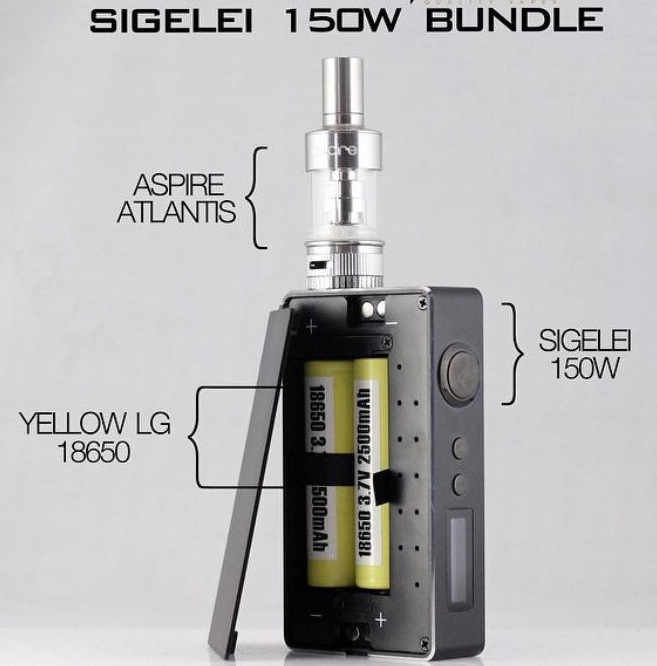 Vaporizers come in the forms of 2-Battery and 1-Battery Mods, with the 2-Battery being the more powerful and longer battery option. The Single Battery is more pocketable. Regarding the 2-Battery, the Best 2-Battery Mod is the Sigelei 150 Watt (Sig150) $90 [eBay] (would go with the 2x battery, silicone case, cheaper than the IPV, magnetic doors, and subjectively the fire button is better). The Best Mini (1 Battery) is the IPV Mini 2 $62 (better than the Eleaf Istick 50W and the iTaste MVP 3.0 50W, IPV has better build quality, removable battery, more power), SX350 Mini is too much more expensive (and requires a coin to open the battery cap, but still better than the Vapor Shark rDNA). More pocketable than the 2-batteries, but the Sigelei

Don’t get: IPV2 (If juice leaks it gets all inside the box, have to unscrew 2 tiny screws to change battery, feels super cheap), IPV3 (similar quality to the Sigelei 150W but the Sigelei has magnet door being a standard feature, better feeling fire button, and silicone case), Cloupor T8 (not as good as IPV3 or Sigelei 150W), Tesla, Vapor Shark rDNA (has issues with its Evolv DNA40 chip: screen glitches, connectivity, battery meter, and temp control wire limitations), Matrix

Battery Advice: Only use married pairs of batteries in parallel/series devices. Basically, buy a fresh pair and label the A and B. They never leave each other, and always get charged and discharged together. Swap between positions for each cell after each charge.
This is for General safety. It ensures the batteries will for the most part keep the same discharge curves, keeping them at the same voltages all the time. What you don’t want to happen is one battery sitting at a higher charge than the other, which can happen using old and new batteries, or mixing different batteries.
Example: vtc5 battery at 40w lasts 4-5 hours

Best Tank (the mouthpiece that holds the Atomizer / E-Liquid)
The new improved Aspire Atlantis V2 $45 [eBay] provides more flavor and smoke (Better than the Nautilus ie Nautilus Mini $25 which leaks, K1 $10), needs at least a 30 watt Mod, (can go up in power and wicks better with high VG liquids and looks better and more ease of use than the Kanger Subtank which needs 20 watts)
Make sure to purchase extra Atomizer coils! 5 packs cost $16, ie [eBay]

Substitute (a close second): Herakles Plus by Sense $33

Don’t get: Kanger (ie Kanger Subtank is quality but harder to pull than the Atlantis, or the Kangertech Aerotank V2 $25 or Aerotank Mini $20 or Kangertech Protank, yet people complain coils are cheap and don’t last long, cheap material, leaks – juice goes in your mouth), Dual coil is bad, Innokin iSub G Sub Ohm Tank (flavor and clouds are right up there with the more expensive tanks but just isn’t quite as good as the Crown by Uwell, Atlantis 2, Freemax Starre, Herakles, but it isn’t far off) 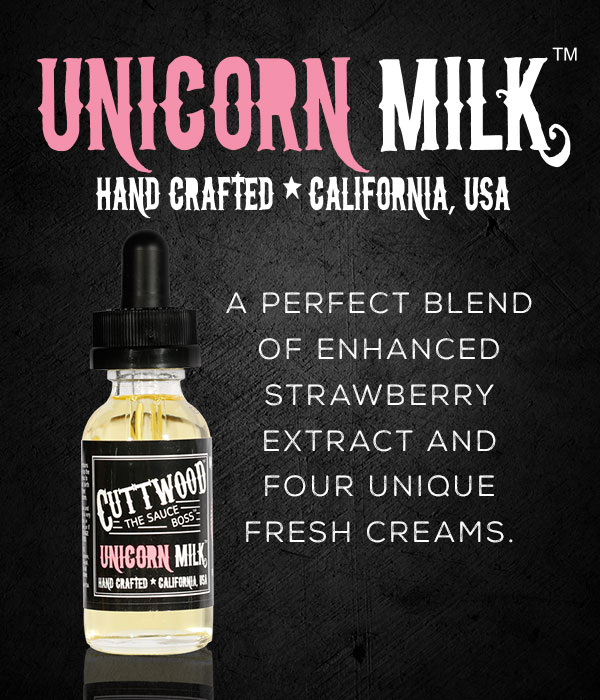 One of the most universally loved flavors is the nigh-strawberry Cuttwood’s Unicorn Milk $10 [eBay] at one of the best values. For a cheaper version of Unicorn Milk, one could go for Charlies Unicorn from [Gordana Vapes]. A High End loved flavor (albeit Seasonal), is the Castle Long Reserve $37 from [Sun-Vapers]. For those of us looking to save extra money, budget sources for off-brand E-Liquids include ~$7/30ml mech sauce or at Vista Vapor (better than Mt. Baker)

Note: Steeping / Aging – Steeping is letting a closed bottle sit for a period of time away from light, or one can let the juice air or breathe by doing the same with the bottle open. Usually these methods will make the juice turn darker in color. Freshly made juice (particularly when DIY) benefits from being left for a few days, maybe even a couple of weeks for the flavor to spread throughout the juice, while most pre-boughts don’t need it. For the best advice, ask the vendor of the juice. But juice has a shelf-life of about two years.

Don’t Get: Suicide Bunny Mother’s Milk (not as great as Cuttwood’s Unicorn Milk)

Best DIY E-Juice
Once you start DIY your tastes are going to change a lot. DIY E-Juices can also be better for those who yearn for a “throat hit” (the slight irritation to the throat that many smokers enjoy).

In other words, Vaporizing Basics As dictated from: Vaping 101 r/electronic_cigarette Quick-Start Guide

You Need:
1) E-Liquid
Propylene glycol (PG) provides more of a “throat hit” and makes the e-liquid thinner.
Vegetable glycerin (VG) provides more vapor production and makes the e-liquid thicker.
Generally, 50/50 is recommended for beginner tanks. Nicotine varies from 0 MG/ML, 3 (or .3% of liquid), 6 (or .6% of liquid, light smoker), 12 (or 1.2% of liquid), and 18 (or 1.8% of liquid, heavy smoker). Warning: Nicotine is a poison, please keep away from children and pets (child-proof caps and stored out of reach).

2) Atomizer
Tank holds the e-liquid and feeds it to the coil head.
Coil contains resistance wire around a wick. The Wick gets soaked with liquid and the wire heats it up to produce a vapor.
Note: Coil heads go bad and need to be replaced after 1-2 weeks of use. Always keep some spare coil heads!

3) Battery Device (sometimes called “MOD” from the days of modifying flashlights to screw 510 atomizers on)
The battery is the power source, as the electricity heats up the coil to create vapor.
Variable Voltage (VV) Batteries give you the option to change the voltage applied to your coil. Turning the voltage up causes a higher wattage which will increase vapor, heat, and throat hit.
Variable Wattage (VW) Batteries are a bit smarter. They look at the resistance of your coils (ohms) and calculate and deliver the correct voltage needed to get to your set wattage. This means you can change tanks without having to change your set wattage.

Don’t get: Way better tasting than a “cigalike” ie Victory and Green Smoke.

Best Hookah for the Biggest Clouds

The Truth about Eyewear Fashion Brands: Glasses used to be uncool; people only wore them when necessary. But with heavy...