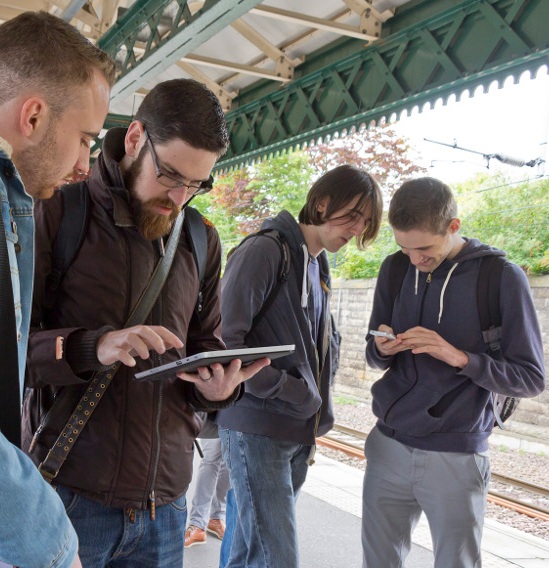 Attempting to calculate the break-even for using a Tablet as a phone (cheap data plan + $5-10/mo VoIP) vs a Smartphone. The Smartphone is cheaper short-term, whilst the Tablet is cheaper long-term (Tablet is more expensive itself but the plan is cheaper per month). Thus, the longer you use your tablet instead of a phone past break-even, the more money you save.

Most Recommended:
Line2 ($10/mo unlimited talk/text)
GrooVe IP (one-time $4, might be a small ~1 second delay so makes talking at the same time a little hard, but is said to be better than Moplus and Talkatone)
Talkatone free to USA/Canada from USA (good quality but there is a delay)
Vonage Extension (only viable if you have Vonage for your home + Google Voice, not 100% sure if it’ll work)
MobileVoIP (differing rates depending on VoIP Host)
Skype $3/mo unlimited USA/Canada Calls
Moplus free
ooVoo
Sip Droid

Best Plans/Tablets and Accessories, for Replacing Phone with Tablet

Recommended Plan
Verizon is recommended for the best service generally (depends on location), even though tends to be slightly more expensive than the competition. AT&T is decent, sometimes has higher speeds in some areas but slightly worse service overall. AT&T plan is $30/mo for 3gb on contract tablets (1gb more data than Verizon’s $30/mo for 2gb). Note: For Verizon, if you can get in somebody’s “Share Everything” cell plan, you can add a tablet for only $10/month (and to add data +$10/mo per 2gb). The other carriers are similarly priced.

Recommended Carrier 4G Cellular Tablets
Tablets range from 7 to 13 inches. The 7 inch might be more easy to carry by hand or pocket. 10 or 13 inch tablets are nice because it is also more of a laptop replacement, however they are a slightly more inconvenient carry (I recommend a leather shoulder bag, but good ones may be hard to find to fit the tablet perfectly).
Many great tablets are wifi-only (not on cellular data), such as the Microsoft Surface Pro 4. In addition, the big 12-13 inchers: iPad Pro and Samsung Galaxy Note Pro (laggy) are hard to lug around, even though they are premium quality, so I would recommend the below options more, however, the iPad Pro wins over the Samsung Galaxy Note Pro in a head-to-head between the two.

Recommended Accessories for using Tablet as a Phone

Wireless Bluetooth Handset/Headset
For wireless, you can either go budget or mid-level best value for better noise cancelling.

Replacing a cell phone with a tablet ONLY saves a good amount of money if you are replacing a plan that is $55+ (ie an individual plan) AND you keep using the tablet for much longer than 2 years. The newer Verizon Share Everything plan allows a tablet for $10/month, which might be viable if you can leech of someone else’s family plan (and they have extra data for you to use so you won’t have to order more), however this will probably not be the case for most people. If you do manage to do this, you’ll be sticking it to the man (wireless companies), and have hipster bragging rights. 🙂

For the majority of people, a Tablet is currently NOT a valid replacement.
Cons of Tablet instead of Phone:
1) Performance – Tablets should have better performance, however phones are similar in performance to mid-level priced tablets currently in my opinion, due to the fact that there are no carriered tablets with real operating systems (ie the Windows Surface Pro)
2) Total Cost – In most cases, the inconvenience of the tablet is not worth saving $20/mo IMO, especially with the much higher (2x) up-front cost.
3) Public Acceptance – A phone is more accepted in workplaces, where a tablet could be viewed as a toy.
4) Convenience – It’s difficult to find a great classy carry-cases like the iPad 3 Shoulder Flip Case or iPad 3 Shoulder Flip Case2 for most tablets out there, nor bluetooth handsets (I can only find headsets). Microsoft Surface Pro 4, however, has a great keyboard cover.

Pros of Tablet instead of Phone: 1) Greater screen real estate (however, phones with ~5.5inches may be big enough for the average user and can still fit ina pocket).
2) Upfront Cost – With the advent of carriers getting rid of contract phone subsidies, tablets should be getting more viable in the marketplace when they not only have less monthly costs, but now have similar upfront costs

1) Samsung Galaxy Note 4 $200. Large (5.5in screen) but still comfortably fits in both one hand or pocket. Able to multitask on-screen (ie browsing half screen, video half screen). Big battery, downside: little less durable than smaller phones. The Galaxy Note 5 and Nexus 6 does not have a removeable battery, so Note 4 is a better choice than the Note 5 because you can replace the battery yourself! [Verizon $200 AmazonWireless] [AT&T Amazon] [Sprint, Amazon], Substitute: Samsung Galaxy S6, thankfully has a removeable battery if you’d like a smaller size Android phone
Samsung Galaxy Note 4 is also the best value without contract [$330 or less for used on eBay]

2) iPhone 6S or 6S Plus (I would not get this, as android is better to work with for productivity/functionality) [Only available direct from Wireless Carrier Verizon 6S, Verizon 6S Plus, AT&T 6 S, AT&T 6S Plus]

Best Wifi Tablet: In the case you are fine with only making calls on wifi (and have free wifi often ie at work or wherever you frequent), there are more options for better tablets –
Microsoft Surface Pro 4 ($1300) [Amazon] is the best for productivity (the keyboard case is a great keyboard and Windows 8.1 is the best OS for productivity due to it being a full laptop OS). However, it is expensive (do not get the non-Pro Surface, as Windows RT is a gimped OS).
2nd Place: Galaxy Nexus 10 $460 [Amazon]
The Galaxy Note 10.1 (2014 Edition) $550 and Asus Transformer Pad Infinity TF700 $600 have better specs but they both lag at times (Infinity lags more than the new 10.1). Google Nexus 10 $400 has same great resolution as Galaxy Note 10.1 screen resolution, so its probably the better buy at the lower pricepoint. Galaxy Tab S 8 inch
Best Budget Wifi Tablet: Google Nexus 7 $200 (7″) with added benefit of being made by Google so it’ll have prompt Android software updates. The new Apple iPad Mini is also good but a bump in price at $325. (Don’t get Kindle, get at least $180 Galaxy Tab 2 7.0)